Last week at NeurIPS 2021, I presented a paper with Neev Parikh, Omer Gottesman, and George Konidaris on learning suitable abstract representations for reinforcement learning. We describe novel theoretical conditions for a state abstraction to provably preserve the all-important Markov property, and introduce a practical training objective for approximately learning such an abstraction with deep neural networks—all without requiring reward information, pixel reconstruction, or transition modeling.

Reinforcement learning (RL) makes the relationship between a decision-making agent and its environment explicit. The decision process is represented as a loop: the agent takes an action, thereby affecting the environment, and subsequently observes the result through its sensors (along with any reward information), at which point the agent selects another action and the process repeats. 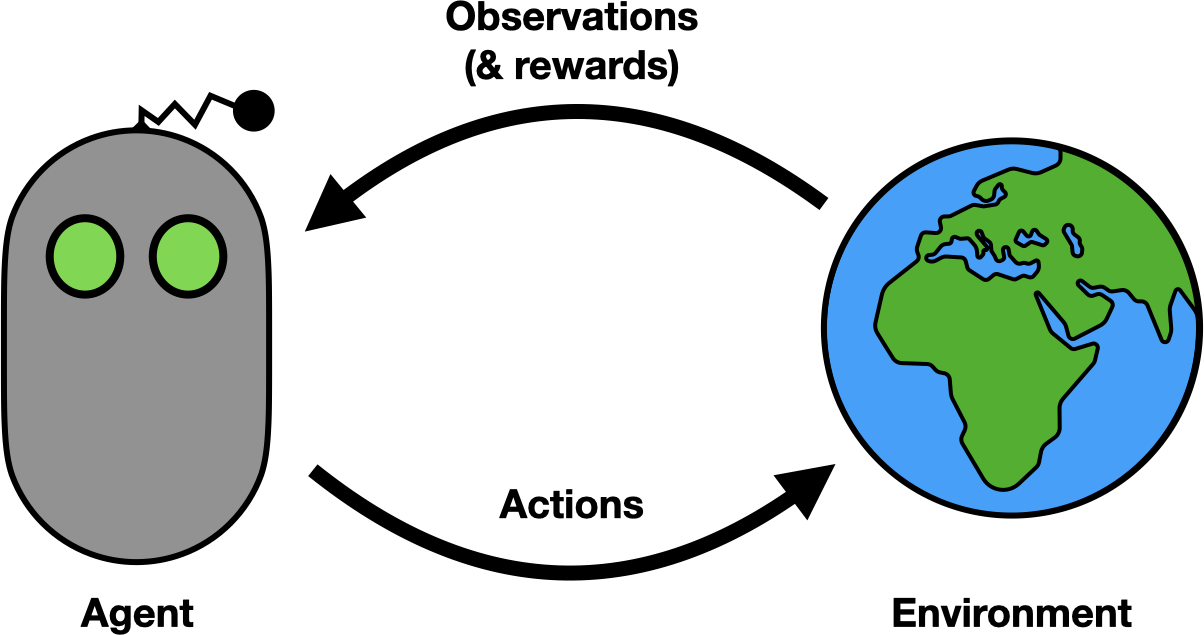 RL is an incredibly flexible framework and can easily be customized for specific applications or to encode various types of assumptions or domain knowledge. In this work, we consider the most basic model, the Markov decision process, wherein observations are assumed to contain complete state information about every relevant aspect of the agent-environment system.

Consider an example decision problem involving a robot agent that wants to go to bed. 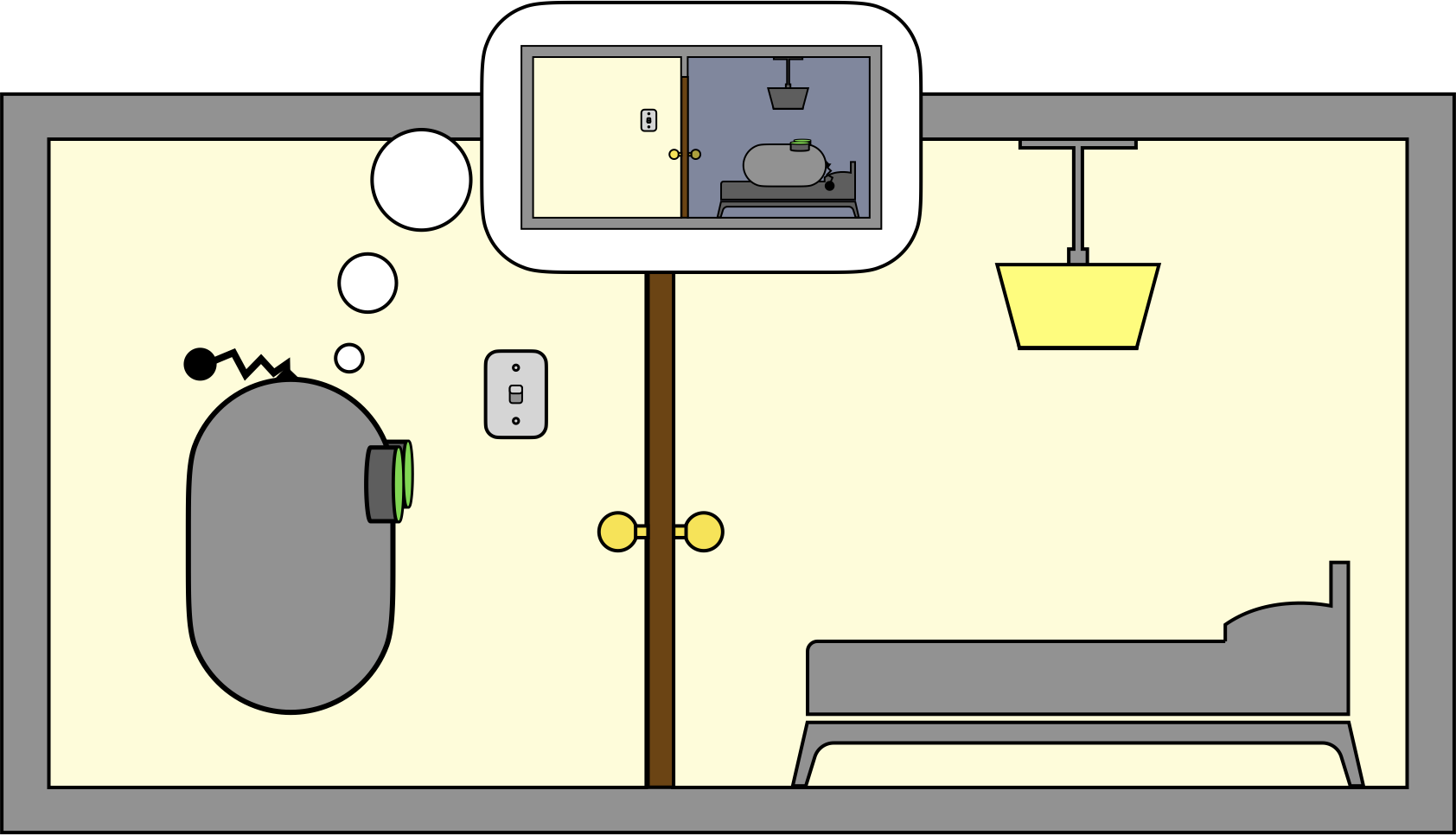 The bedtime problem. (Do androids dream of electric sheep?)

We can visualize the decision problem with the following diagram: 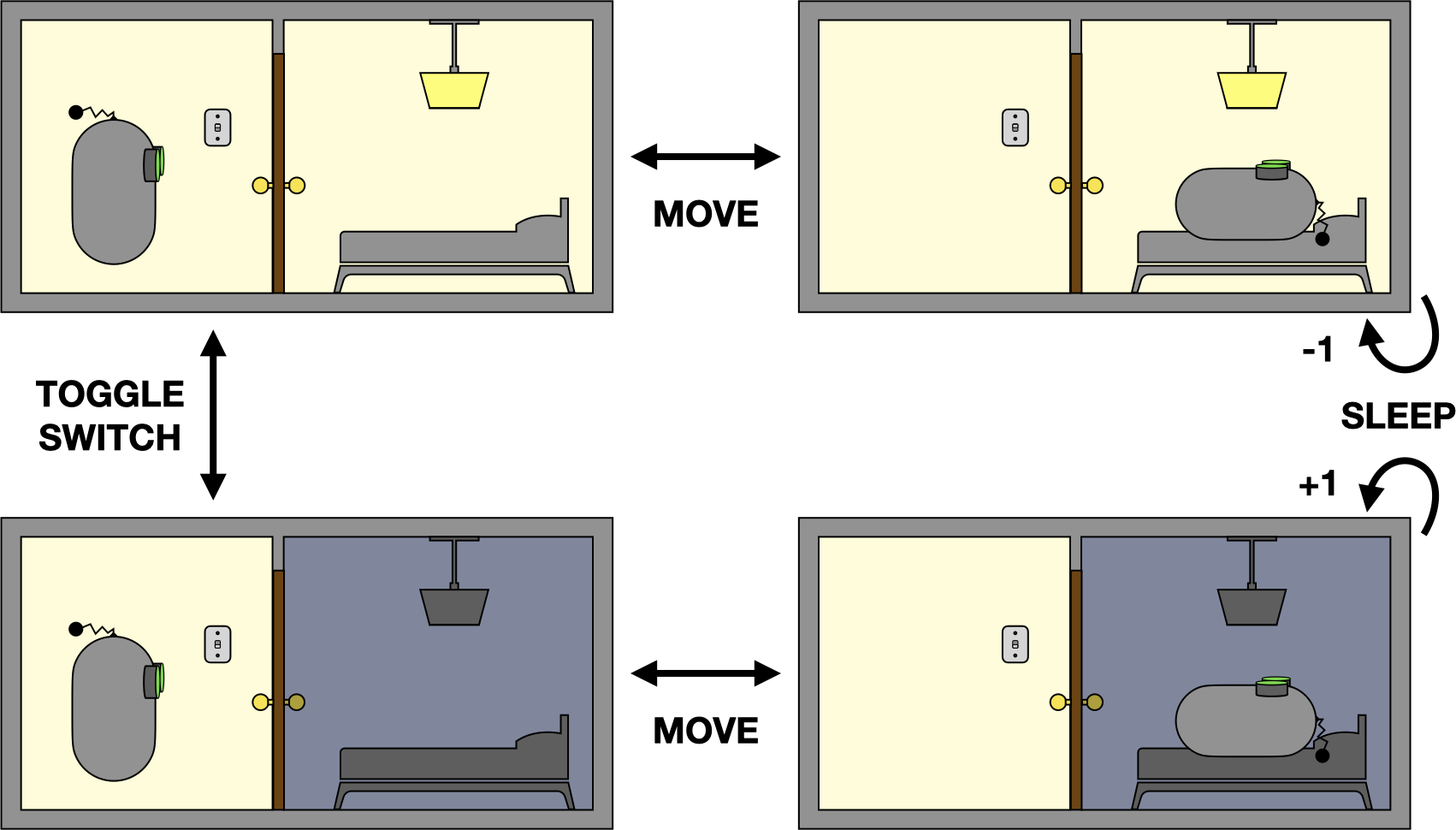 An MDP representing the bedtime problem.

Each image in the diagram depicts a possible world state of the agent-environment system, and the arrows depict the applicable actions for each state and their corresponding state transitions. We can imagine that the agent’s preference for going to bed influences the rewards it receives: +1 for trying to sleep with the light off; -1 for trying to sleep with the light on; and zero otherwise.

The optimal agent behavior can be expressed as a policy, a function mapping from states to actions:

The key aspect of Markov decision processes, and the one for which they get their name, is that the transition dynamics, rewards, applicable actions, and optimal policy all exhibit the so-called Markov property. The Markov property says that knowing the current world state is enough to fully characterize the system—no additional information is required for making decisions.

To illustrate why the Markov property is desirable, suppose we had instead drawn the following diagram, where each image now depicts the agent’s (partial) observation of the world state: 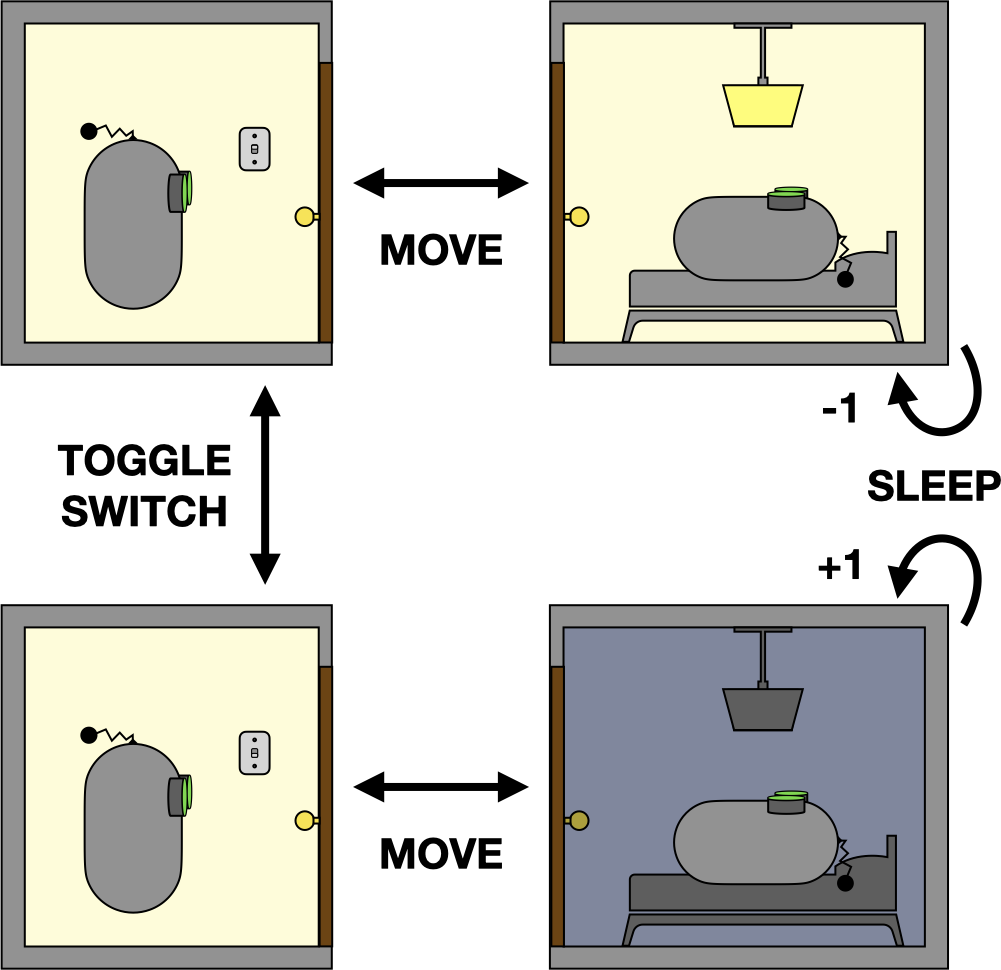 Another representation of the bedtime problem. 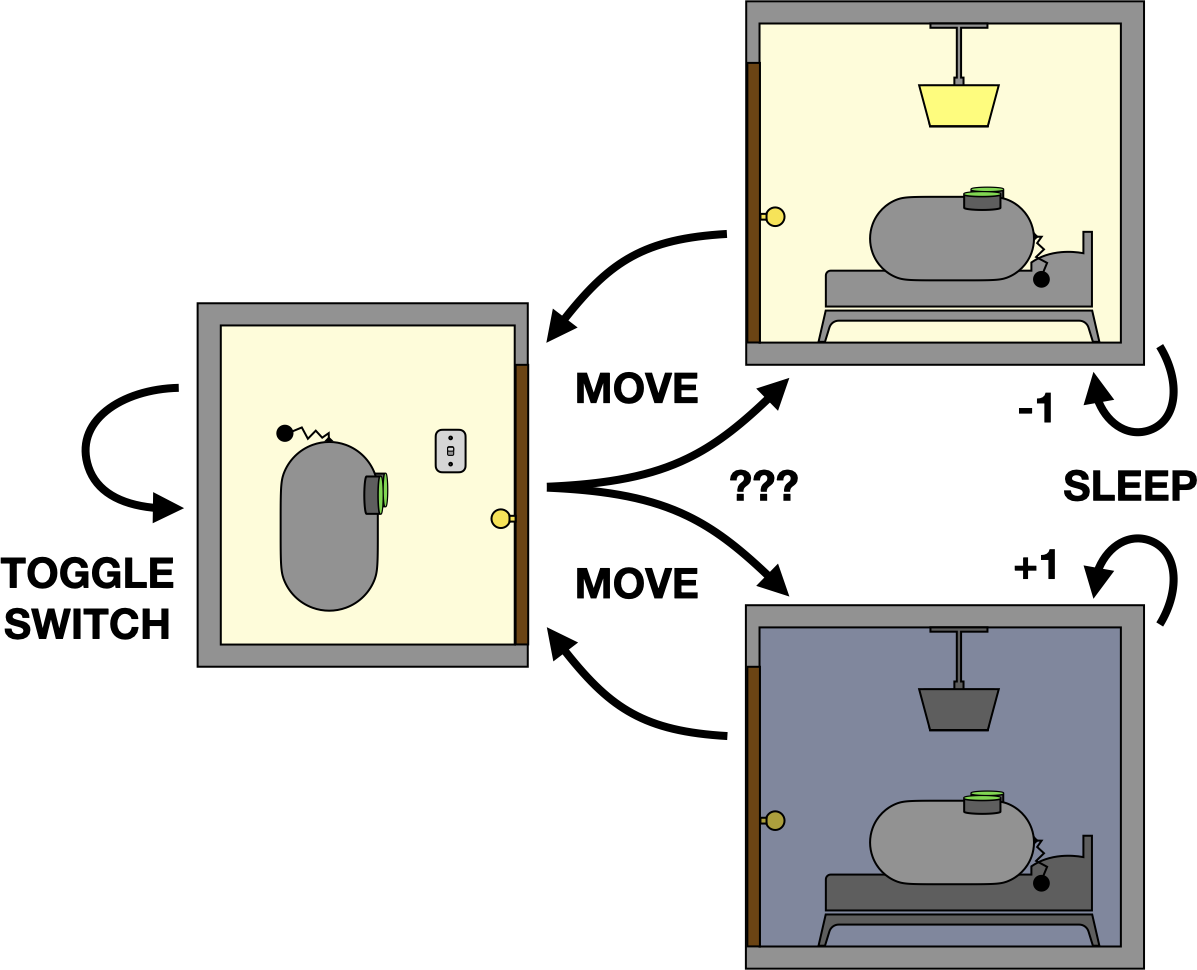 A non-Markov representation of the bedtime problem.

Because the agent is no longer tracking the difference between hallway states, it can’t accurately predict the state of the bedroom light. Now, going to bed requires walking into the bedroom to observe the light, potentially returning to the hallway to toggle the switch (while remembering whether the light is on), and finally going to sleep once the light is off.

This notion of remembering things can get quite complicated, since it can involve longer histories than just one step. For instance, if the agent moved from the bedroom to the hallway, then toggled the lightswitch \(N\) times, subsequently predicting the state of the bedroom light would require maintaining \(N+1\) steps of history.

One of the central goals of AI is to design general-purpose agents capable of solving a wide range of problems. The “bedtime problem” described above is just one of the many highly important tasks a general-purpose robot may be faced with during its lifetime. A robot may also need to fold laundry, drive a car, or play a game of chess.

A general-purpose robot will face many highly important tasks.

To solve general problems, agents need general-purpose sensors. We’ve already seen how the agent’s sensors affect its representation, and that the representation in turn influences the decision making process. Agents who are likely to encounter lightswitches should be equipped with cameras precise enough to resolve the state of those lightswitches. If those same agents also need to fold laundry and drive cars and play chess, the cameras must support those behaviors as well.

Unforunately, general-purpose sensors introduce new challenges for effective decision making. Rather than making decisions in the appropriate problem-specific representation, the agent must make decisions using its problem-agnostic sensors. For example, rather than learning the optimal policy for a bedroom MDP conditioned on one of just four possible world-states, a general-purpose agent must instead condition its behavior on the limitless number of possible images produced by its high-resolution camera.

To enable efficient decision-making in the face of rich observations from general-purpose sensors, we will turn to state abstraction. In general, abstraction is the process of summarizing information or computation to reveal its essential structure, typically for the purpose of generalization. In the context of decision-making, a state abstraction is a function \(\phi\) that maps from a rich sensor observation \(s\) to a simpler, problem-specific abstract representation \(z = \phi(s)\), with the hope that decision-making is easier when conditioned on the abstract representation \(z\). By replacing \(s\) with \(z\), we can generalize over a potentially infinite number of rich observations using a single abstract state. 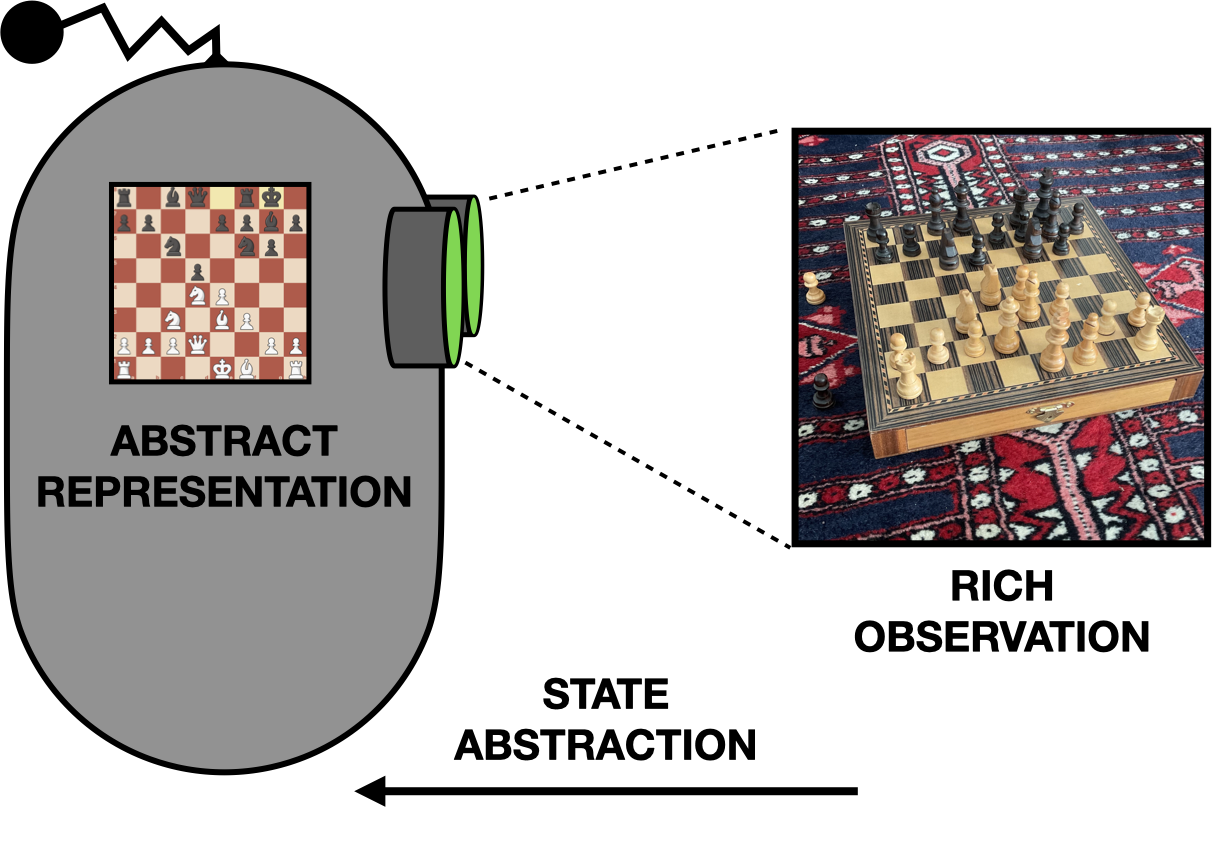 A state abstraction for playing chess from image observations.

By definition, general-purpose sensor observations contain too much information for any specific task. When learning a problem-specific abstraction, the goal is to determine which information is essential for solving the problem and which can be safely thrown away. For example, can the chess abstraction ignore the pattern on the carpet? Can the bedtime abstraction throw away information about the lightswitch, or will that cause the representation to lose the Markov property?

In this work, we introduce novel theoretical conditions that guarantee a state abstraction preserves the Markov property, provided that the rich observations themselves were a Markov representation to begin with. We then adapt those conditions into a practical training objective for learning such an abstraction directly from the agent’s experiences.

Our main result is that a state abstraction \(\phi\) is Markov if both of the following conditions hold:

To illustrate this point, we can return to the non-Markov representation of the bedtime problem from earlier. One way to look at the three-state representation is that it’s an abstraction of the four-state version. The abstraction ignores the lightswitch and thereby groups the hallway observations into a single abstract state:

A non-Markov abstraction of the bedtime problem that combines hallway states.

Condition 1 involves a form of “inverse dynamics model”. We typically think of an MDP as having forward dynamics that we can express as a distribution \(\Pr(s'\vert s, a)\) over possible next states \(s'\) given a particular state-action pair \((s, a)\). By contrast, an inverse model predicts the action distribution for a given state-and-next-state pair: \(\Pr (a\vert s', s)\).

Condition 2 is a type of “contrastive” or “discriminative” model, since it is deciding between two different types of inputs: real state transitions and fake ones. In other words, it can be implemented as a simple binary classifier.

To learn a Markov state abstraction we train a neural network to do both jobs at once. The original MDP states \(s\) are converted using the abstraction \(\phi\) into abstract states \(z\), where \(z=\phi(s)\). The resulting abstract states are then used to train an inverse model \(I_\phi\) and a discriminator \(D_\phi\). The inverse model learns explanations for abstract state transitions, while the discriminator learns to predict which state transitions are real and which ones are fake.

The training architecture allows us to encode the Markov conditions as a practical neural network training objective, thereby expressing our theoretical constraints as an optimization problem for directly incentivizing learning a Markov abstraction.

Earlier, we talked about how general-purpose agents require general-purpose sensors, and how those sensors contain more information than is sometimes useful for decision making. To test our training architecture on the type of general-purpose sensors that we care about, we will use a visual gridworld navigation problem. The agent can move horizontally or vertically to any of the discrete grid positions, but its observations come from a noisy camera positioned above the grid. 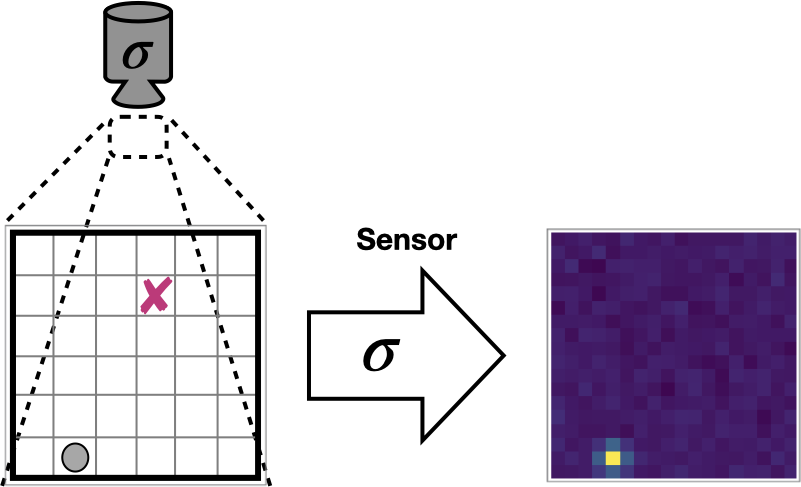 The objective is to navigate to a particular location (marked here with an X). The agent receives -1 reward for every timestep until it reaches the goal, at which point the episode ends, then the agent respawns in a randomly chosen location and the process repeats.

We can see exactly how important it is to choose the right representation for the gridworld problem if we compare decision making with visual features vs. with “expert” features describing the precise x-y grid position (which normally would be hidden from the agent).

The gap in learning performance for two different gridworld representations.

Clearly there’s a significant gap in learning performance between the two representations. The hope is that state abstraction can help us close the gap. If we can learn an abstract representation that recovers the underlying structure of the gridworld, maybe the agent will be able to learn more efficiently.

We will test our approach as follows. We allow the agent to randomly explore the gridworld and generate experience data (ignoring goal/reward information for now), then we use those experiences to train a Markov state abstraction using the architecture from the previous section. 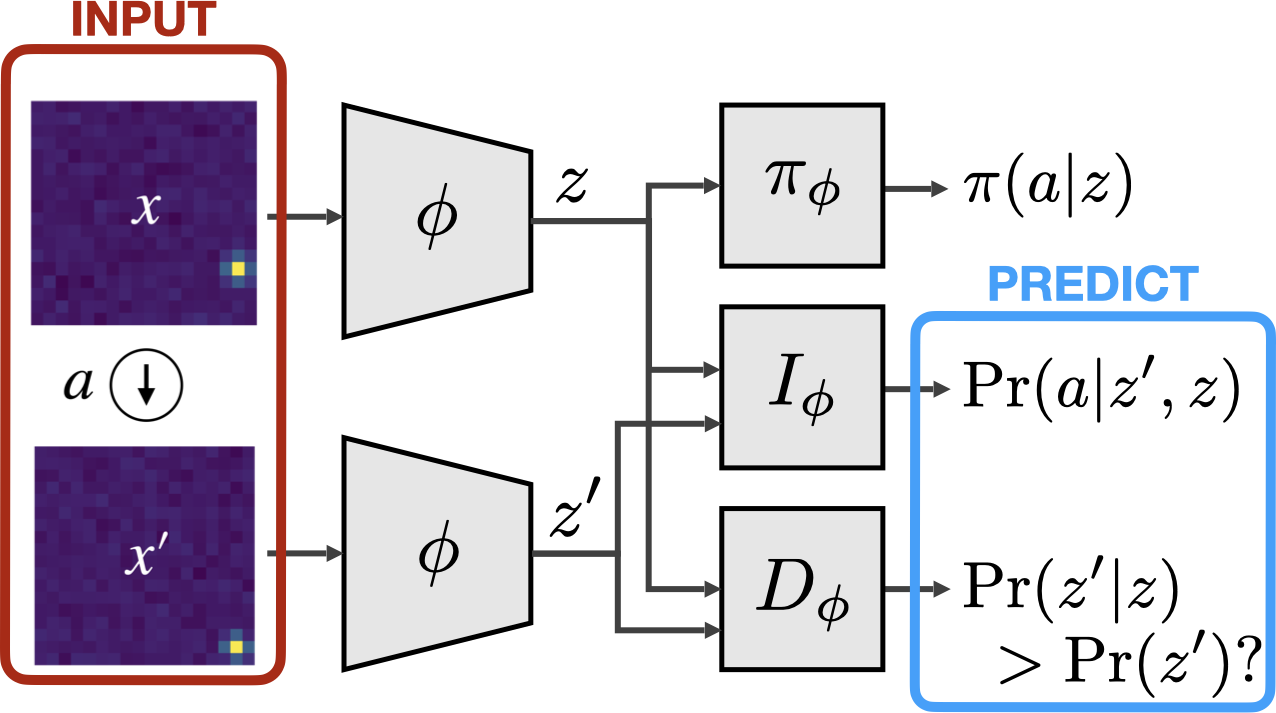 Applying the Markov state abstraction architecture to the gridworld problem.

We constrain the learned representation \(z\) to be two-dimensional, so it’s easier to visualize.

As training progresses, the representation quickly converges to one that reflects the underlying grid structure. The color of the points here denotes the hidden “expert” x-y position and is not shown to the agent. This demonstrates that the agent is able to discover the problem-specific structure. 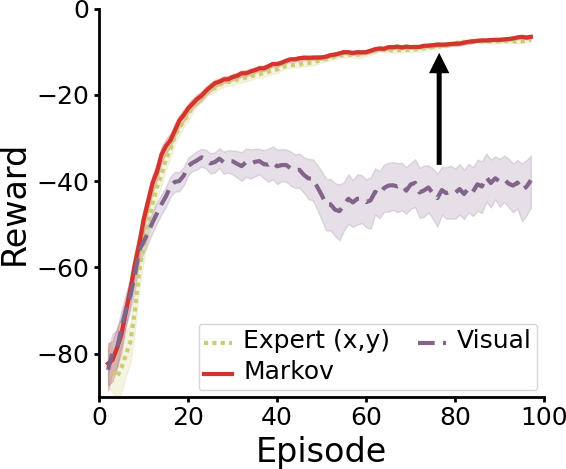 The red line shows reinforcement learning performance when using the learned Markov representation, which turns out to be just as good as with the expert features. Essentially, our method allows the agent to autonomously construct its own problem-specific abstract representation, then use that representation for decision making instead of its built-in sensor observations.

To test the generality of our approach, we next looked at a set of simulated robotic control tasks from the DeepMind Control Suite. These tasks involve controlling a simulated robot in order to perform various activities from rich, visual observations. 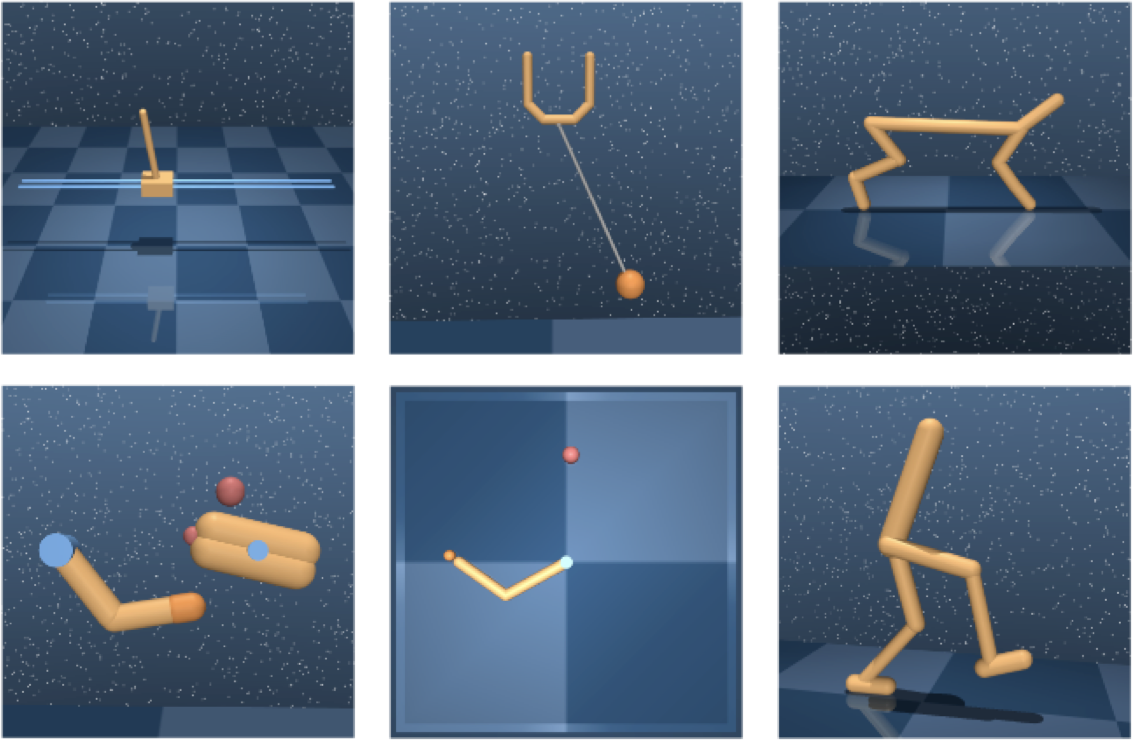 Example observations from six tasks in the DeepMind Control Suite.

We again train a Markov state abstraction, and compare our method against several other representation-learning approaches.

We find that Markov state abstractions (in red) achieve substantially improved learning performance over a baseline algorithm (the “RAD” agent, in purple) that does not attempt to learn such an abstraction. We also find that the resulting agent beats every other baseline in a head-to-head comparison on the majority of domains.

We started by introducing Markov decision processes (MDPs) as a useful way to formalize the reinforcement learning problem. We talked about how choosing the right problem-specific representation is important for efficient decision-making, and saw that modeling a problem as an MDP requires a Markov state representation. We also saw that while state abstraction can be helpful for making decisions when faced with general-purpose sensors, it unfortunately isn’t guaranteed to produce a Markov representation.

To overcome this issue, we outlined a set of theoretical conditions that are sufficient for an abstraction to preserve the Markov property, and introduced a practical training objective for learning such an abstraction from data. We demonstrated that the resulting approach is able to learn a representation of a visual gridworld problem that recovers the underlying grid structure and that fully closes the representation gap, matching the learning performance of using expert features. Finally, we showed that our approach leads to state-of-the-art representation learning performance on a variety of simulated robotic control tasks.

For a more detailed discussion, including a formal proof that the two conditions we introduce are sufficient for a Markov abstraction, plus an in-depth derivation of the training objectives, check out the full paper. We also discuss a number of alternative methods for learning Markov state abstractions, and include a few more experiments in the appendix.